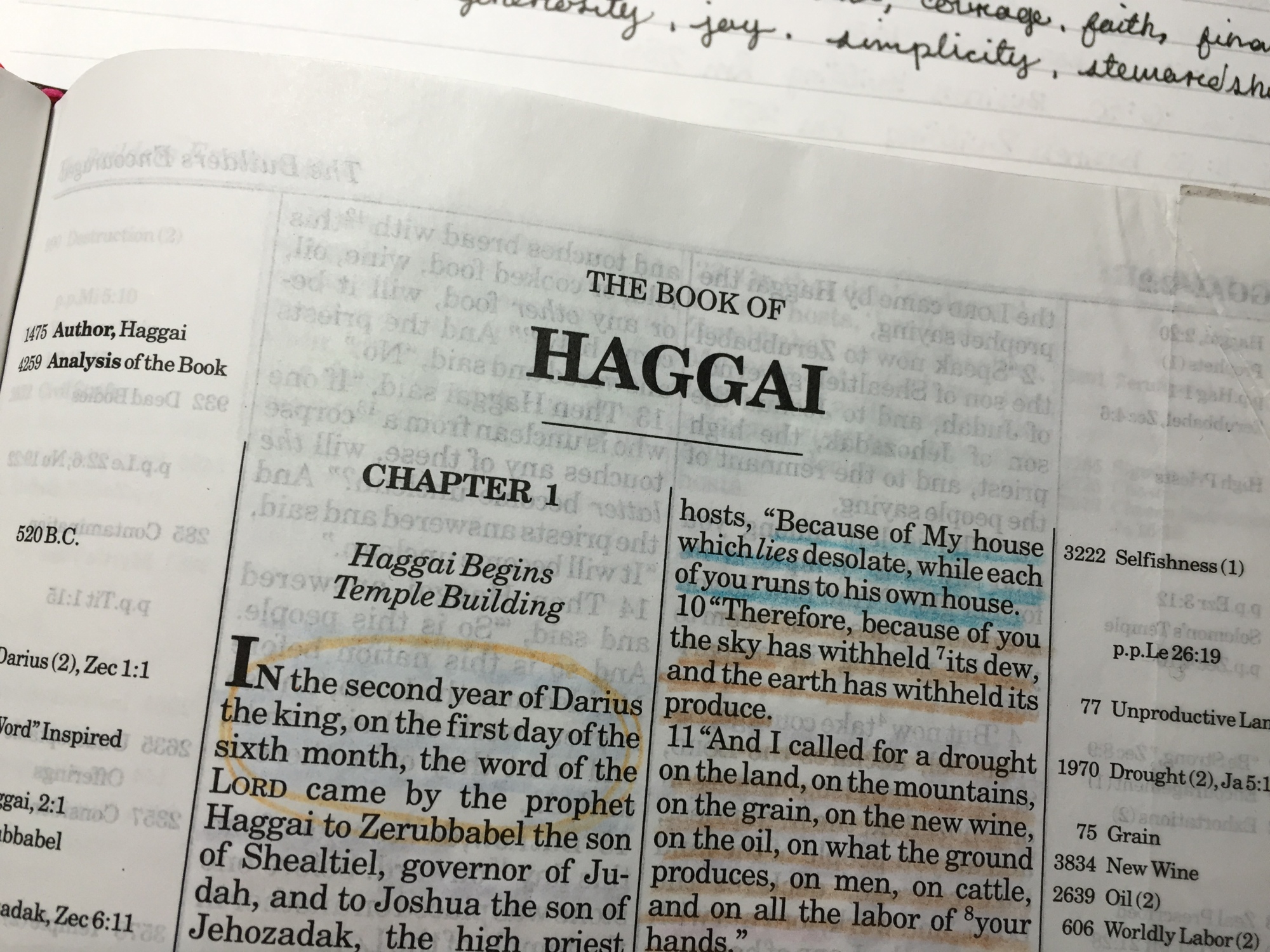 I spent my morning pondering Haggai, one of the minor prophets near the end of the Old Testament. I took some lessons to let myself steep in, four of which I will share with you.

Five times in this short two chapter book, the LORD says, “Consider.” “Consider your ways” and “consider from this day on.” It’s important to be self-aware and to challenge your habits and lifestyle. How often do you double-check that you’re on the right path? Take today to consider your priorities and ask if your actions match them.

“But now take courage, Zerubbabel…take courage also, Joshua, son of Jehozadak, the high priest, and all of you people of the land, take courage,” declares the LORD, “and work.”

Haggai is a story of redemption. In the beginning, the Israelites are choosing fear and that fear has led them to misalign their priorities. Instead of honoring God’s temple with their work, they were decorating their houses. They were doing things out of order. Their punishment for this was harsh:

(Hmmm, always un-satiated? Does this sound familiar?) But the Israelites took the warning from Haggai: they turned it around, got back on the wagon, abandoned their figurative idols. The story takes a dramatic veer towards the positive. Just days after Haggai’s first message, their spirits were stirred up.

And the people showed reverence for the LORD.

Immediately, Haggai was sent again, but this time the message is quite different:

‘I am with you,’ declares the LORD.

Where once was distance, now there is nearness. Realign your priorities correctly and you may enter again into His presence.

Once more in a little while, I am going to shake the heavens and the earth, the sea also and the dry land. And I will shake all the nations; and they will come with the wealth of all nations; and I will fill this house with glory… The silver is Mine and the gold is Mine… The latter glory of this house will be greater than the former.

Everything belongs to Him: you’re just borrowing it for a time. He will choose to move the nations, to move the wealth, to move the Earth wherever He pleases. For me personally, I shy away from praying about money because it feels evil, selfish, or undeserved. But money isn’t evil, money is the LORD’s. When you use money for God’s purpose, He gives it freely:

‘Bring the whole tithe into the storehouse, so that there may be food in My house, and test Me now in this,’ says the LORD of host, ‘if I will not open for you the windows of heaven and pour out for you a blessing until it overflows.’ (Malachi 3:10)

Bring every aspect of your life before Him, because His power knows no bounds and He is waiting to bless His people.

2 thoughts on “Morning Devotional from Haggai”